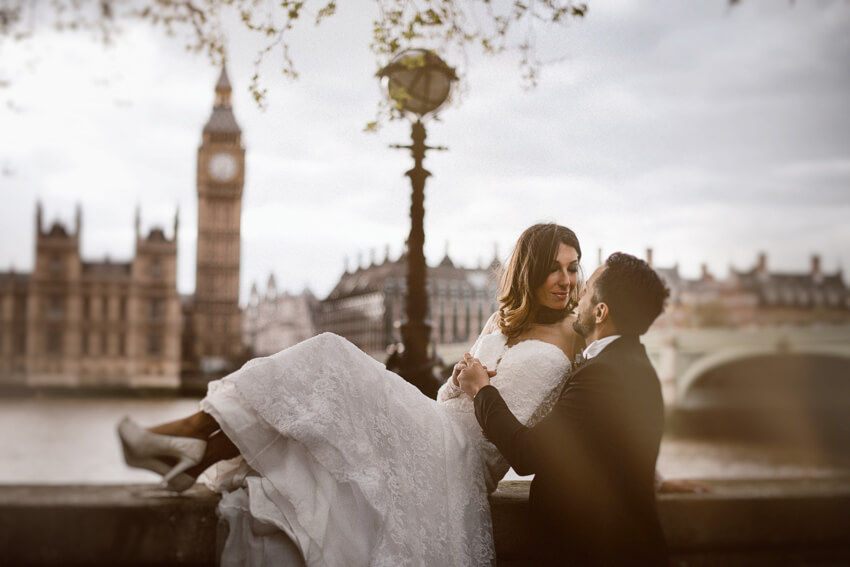 Posted at 12:51h in Weddings by admin

There are cities I have a special connection. London is one of these. Everything started years ago with a photo of a big red bus and Westminster on the background, it was before the Olympics Games and that pictures was used for several articles about the event in the English city.

A photo born by chance, I was having a photography lesson and I was explaining the use of the blurred. I clicked and that photo was born.

Between that lesson’s pupills there were Simone and Chiara who, to narrate their wedding, decided to come back in England and freeze their love story with London as background.

Honeymoon is a photographic style which is even more in style. Lot of people, especially from other States, decide to bring the wedding dress with them (and usually also the photographer) in the Honeymoon to have a unique memory of their wedding.

In the years, we did Honeymoon in New York, Venice, Florence and we already did a service in London, but this time the challenge was harder.

We were in London few days after the terroristi attack on the bridge where a psycho went with a car against tourists; while I was taking the flight, I thought that I wanted to narrate this, somehow. How to link the carefreeness of a holiday with the attack against our culture.

The wedding photography was always a proof of a period and of an evolution, how to narrate this?

The answer came under the Wenstminster bridge. At the end of the bridge, not far from the big fountain, there’s a passage with an arch that perfectly frames the Big Ben.

It was one of the most photographed view in London and we also decided to take some pictures there. But, when we arrived there, we noticed another couple who was shooting there: two guys with a grey jacket who celebrated their same sex wedding.

It was just a moment, the photo that narrate my way of thinking was in front of me, two couples were kissing in front of the flowers which celebrated the terroristic attack. They were saying that no one could attack us, that our freedom and our free vision of the world cannot be discussed.

Maybe, this is the most meaningful photo of the service: this four guys kissing on the Thames and facing a culture that attacks us and crushes our freedom.