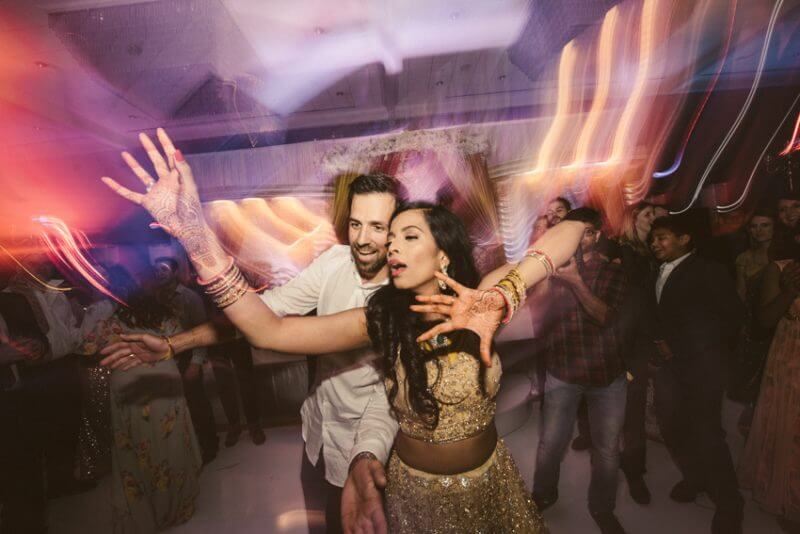 Posted at 10:10h in Weddings by admin

If you’ve read the previous article, you’ll know that Sindu and Stephen had a traditional Indian marriage at the Indian Culture Centre in Dallas, Texas.

The second chapter tells you about the phenomenal party that our bride and groom had at the Hilton hotel in Dallas to celebrate their marriage.

Where I come from, when you say you want to do something “American style”, it means things have got to be huge. Until yesterday, this was just a saying…after the experience I had, it-s no joke. The Hilton in Dallas is a 15 floor building composed of three united buildings with spaces between them. Before taking any photos we went to visit the hotel and we were astonished by the sign on the door: maximum capacity 5000 people.

When the wedding planner told us that in a few days there would be around 900 guests, we were slightly shocked. Three against nine hundred.

There are moments in your professional life where your hands start to shake, this was mine.

I have no idea what my colleagues were thinking, Damian and Serena, but I thought that this party was going to be an incredible occasion to capture some sensational images.

That day I was ready, my cameras had to give their 100% and so did I. The first part of the party was fairly calm, with some touching speeches from the guests. The second part however was much more lively with a lot of modern Indian music.
Following the Anglo-Saxon traditions, the best man and members of the immediate family spoke about the young couple.

When I take photos at a wedding, I completely focus therefore forgetting everything around me and lose myself in what my subjects want to transmit. I remember that day, the strong feeling of being taken aback by the bride’s father’s words. I remember his speech, the praise he had for his daughter and his look of satisfaction knowing that his daughter had reached many goals both professionally and personally. I thought about how proud he must have been of her degree from Northwestern University. Then I turned to look for Sindhuri’s eyes and I found a look of even deeper emotion. It was then that I knew how strong their bond was.  Sindu’s eyes showed so much love, a union so strong and deep between her and her father. I believe that such a strong connection between a father and daughter is hard to find, it appears so rarely and I myself have rarely seen it so clearly. I hoped that I could have such a connection one day with my daughter. It’s unbelievable that while I was thinking about this touching thought, little did I know that we were already expecting Giulia. One day I will show my daughter these photos from this wedding and I’ll tell her about how much I wished that in the future we could create the same bond that holds Sindu to her father.